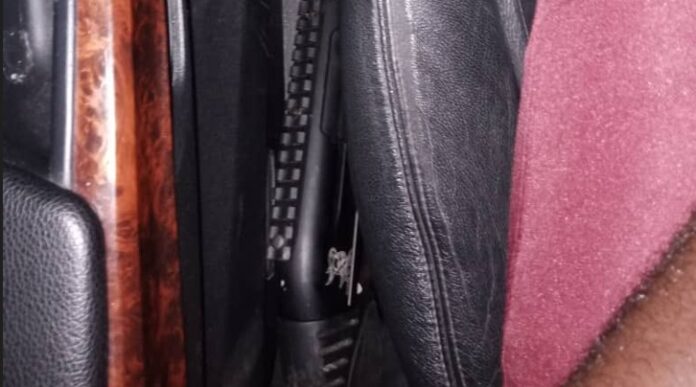 The vehicle, identified as a black Honda, was seized when the driver was found driving against traffic around Sango-Tedo inward Abijo GRA, along the Lagos-Epe expressway.

Adebayo Taofiq, LASTMA spokesperson, in a statement on Thursday, said the driver absconded after he discovered that the officials had seen the gun.

Taofiq said the unregistered vehicle and the gun have been handed over to the divisional police officer (DPO) of Ilasan police station for further investigation.

“In no time that the owner/driver of the unregistered impounded vehicle (Honda) noticed that the gun (Pump Action) had been sighted inside his car he immediately took to his heel and was nowhere to be found anymore,” the spokesperson said.

“The unregistered impounded vehicle (Honda car) with the recovered gun had been handed over to the Divisional Police Officer (DPO) of Ilasan Police Station for further investigations.”

In Lagos, driving against traffic, popularly known as one-way driving, is an offence liable to a three-year jail term and forfeiture of the vehicle.