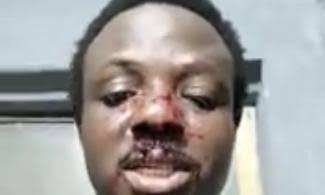 The Lagos police are looking into a video making rounds of a skating coach who narrated his ordeal with kidnappers.

In the now-viral video, a skating coach, whose identity was not disclosed, is spotted with a bleeding nose.

He stated that he boarded a bus going to Iyana-Oworo from Lekki after his training had ended for the day.

The skater said noticed sleeping gas was likely sprayed, prompting him to cover his nose with a handkerchief.

“As I got onto a bus that called [for] Iyana-Oworo, I noticed that there was this weird smell in the bus. And anybody who has been involved in any training military or settings would know about gases that knock people off,” he said.

“So I knew that’s what it was. I spat in my handkerchief and used it to cover my nose.

“In about five or ten minutes, every other occupant of the vehicle were all asleep aside from the team members who had all brought nose masks coincidentally to cover their nose.”

The skater said the supposed leader of the kidnappers confronted him for not sleeping, confirming his suspicion.

The skater said he started pleading with the supposed driver to take his possessions but let him exit unharmed.

The victim said the bus operators refused but, instead, made known their intention to “dagger” all the abductees.

The skater said he was able to escape from the vehicle due to a small knife he had hidden in his bag.

Reacting to the video in a Twitter post, Benjamin Hundeyin, the Lagos police PRO, assured the public that an investigation was already ongoing on the matter.

The Lagos State Police Command is not unaware of the video making the rounds about the presence of some criminals in the Lekki area of Lagos.

“The Lagos State Police Command is not unaware of the video making the rounds about the presence of some criminals in the Lekki area of Lagos,” Hundeyin wrote.

“In-depth investigation has commenced. The command will leave no stone unturned toward ensuring the safety and security of all residents and visitors to Lagos state.

“All human, material, and operational resources have been duly and optimally deployed to achieve this. We appreciate Lagosians for always saying something when they see something.”