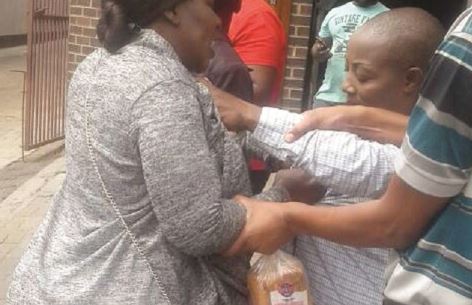 A heavily pregnant woman risked all when she attacked her husband’s mistress in full view of passersby in the Bulawayo city centre.

Nomusa Phiri from Bulawayo’s Tshabalala suburb held the girlfriend, identified as Mandy, by the collar and unleashed punches near Edgars offices at the corner of 9th Avenue and Hebert Chitepo Street at around 10 am last Friday.

Top of Nomusa’s demands was that Mandy should cut ties with her husband Austin Phiri.

Typical of the “other woman” in a relationship, Mandy said Nomusa should leave her alone and instead deal with her husband.

“Tell him, not me, to leave me alone. I didn’t come after him,” Mandy barked.

When Phiri tightened her grip, Mandy went a gear up.“Probably he came after me because you are not good in bed,” she added.

But the public was on Nomusa’s side.
“There are many men out there. She has to find her own and stop this nonsense,” said one of the onlookers that had taken out their smartphones to record the drama.

When Nomusa finally let go of Mandy, the latter told B-Metro that she understood where Nomusa was coming from but she (Mandy) didn’t know he was married.

“When he asked me out he didn’t tell me that he was married. He’s a selfish man as such the wife should deal with her not me,” said Mandy.

Contacted for a comment Austin said: “It was a misunderstanding between my wife and my cousin. We have since solved the issue. I kindly beg you to drop the story because it will tarnish my reputation.”