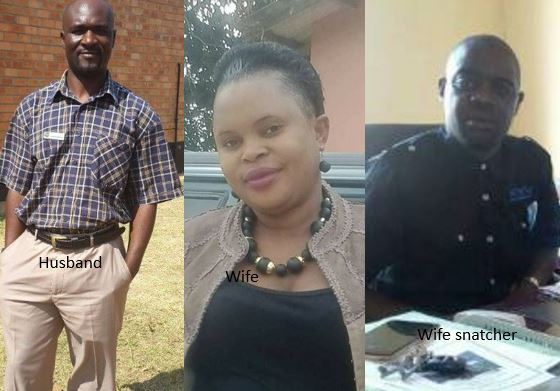 An alleged abusive husband identified as Gideon Simwanza, who got separated from his wife, has accused a Zambian District Education Standard Officer (DESO) Mr Victor Simufwi, of snatching his wife of 20 years.

The estranged husband who said he got married to his wife in 1998, has been reportedly abusing his wife for more than 13 years by going out with many women, beating her and even chasing her from their house.

Mr Simwanza’s relative, who spoke to newsmen, said the lady who was almost killed by her husband, even got a transfer from Mkushi to Nakonde at Ntindi Basic School just to runaway from her abusive husband.

“Yes, I can confirm that Madam Idah Nankamba my mlam is no longer with this man. He is my relative but I can disclose to you that he has been abusing his wife for more than 13 years now to the extent that in 2009/2010 they went on separation and she even got a transfer from Mkushi to Nakonde at Ntindi Basic School just to runaway from her abusive husband.

In short, what I am telling you is that Mr Simwanza has been abusing his wife to the extent of wanting to kill her. So we are glad as a family to the man that his first wife has finally divorced him”, said a family source who pleaded not to be named for fear of being beaten by Mr Simwanza.

However in a May 12 Facebook post, Mr Simwanza wished that his wife and the alleged wife snatcher, Victor Simufi, get their reward soon enough.

He wrote;
“Victor Simufwi DESO MKUSHI thank you very much for successfully snatching away from me my lovely wife of 20 years in marriage this year, Idah Nankamba, the reward for both of you is surely soon coming your way in Jesus Christ name.” Leaving You Was A Blessing In DisguiseZUMI