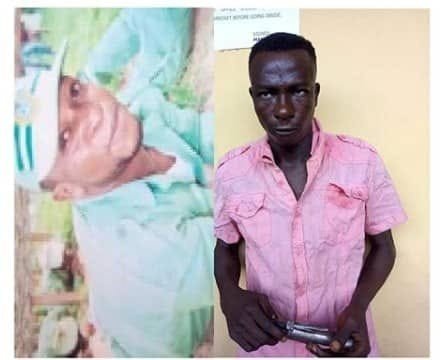 The Bayelsa State Police Command have arrested a notorious cult leader, armed robbery and suspected killer of a corps member who was shot dead in 2016.

The suspect, Prince Owei, an indigene of Ikebiri community of Southern was said to have killed James Onuh, a member of National Youth Service Corps in Obele area of Yenagoa, Bayelsa State in 2016.

He was arrested on Thursday by the special tactical team of the State Police Command following an order of the State Commissioner of Police, Austin Iwar.

The victim who was a graduate of the Federal University of Agriculture, Markurdi, Benue State, was attached to the Bayelsa State Ministry of Works and Infrastructure for his primary assignment before the sad incident. He was shot dead at Obele junction in Yenagoa while withdrawing from Automated Teller Machine in 2016.

The police spokesman, a Deputy Superintendent of Police, said the suspect was arrested at the Samson Siasia Sports Complex, Yenagoa, on his way to watch a football match.

He said the police recovered a locally-made revolver pistol, one live cartridge and packets of Rohypnol tablets from Owei.

Butswat said, “On September 20, 2018, at about 1610 hours, operatives arrested a notorious cult leader and a robber who was on the wanted list of Bayelsa State Police Command.

“The suspect one Prince Owei, male, aka Big Fela, 19, from Ikebiri community, but resident at St. Peters, Ovom, was arrested at the Sports Complex, Yenagoa, on his way to watch a football match.

“A locally-made revolver pistol, one live cartridge and packets of Rohypnol tablets were recovered from him.

“The suspect, a jailbird and a confessed member of Icelanders cult group will be charged to court when investigations are concluded.

“The command is determined to ensure the safety of lives and property. We hereby appeal to the members of the public to provide useful information that will assist the police in fighting crimes in the state.”