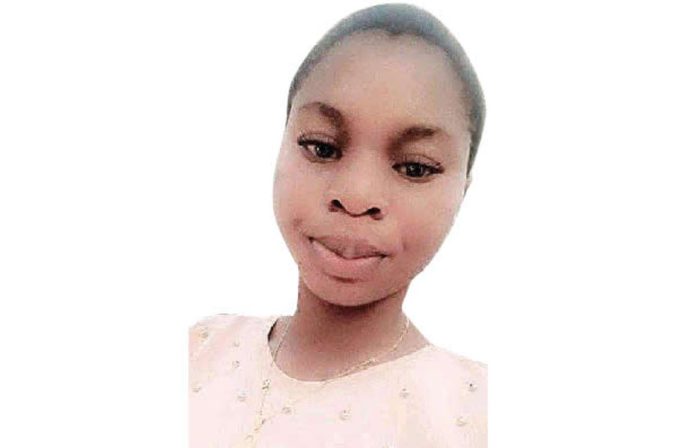 The 21-year-old SS 3 pupil committed suicide last Sunday after she was allegedly beaten by her stepbrother, Moliku Sulaimon, whom she lived with at Olorunshogo Iyewa, in the Isawo area of Ikorodu, Lagos State.

Neighbours, who spoke to Sunday PUNCH, accused Moliku of serially assaulting Sherifat, noting that she became frustrated and took Sniper after he repeated the act last Sunday morning.

It was learnt that Sherifat and her two siblings started living with Moliku after their mother left the family, following their father’s death. Moliku, the eldest child in the family, is in his 40s.

Our correspondent gathered that Sherifat helped Moliku’s wife to get some loaves of bread she would sell at a bakery within the neighbourhoood and placed them somewhere in the apartment.

She incurred Moliku’s anger when rodents tampered with one of the loaves, a resident said.

“She had been living with him since their father died. She was a kid then. Her siblings used to live with him too. They left out of frustration because he always beat them,” the neighbour, who spoke on condition of anonymity, disclosed.

He stated that there were marks of canes on Sherifat’s body, adding that Moliku hurriedly took her corpse to their hometown in Ijebu, Ogun State, where it was buried the following morning.

He said, “After she returned from the bakery on Sunday morning, he beat her again because rats ate part of a loaf. It was out of frustration that the lady took a poison. She died on arrival at the hospital and he quickly too her corpse to their hometown in Ijebu for burial. He knew he would have been queried if the police inspected the body and saw the marks. Neighbours were bitter that Sherifat died that way without any action taken against the man.”

The chairman of the community development association, Mr. Adekunle Adeigba, said he was not aware of the assault until the incident happened.

“Someone called me on Sunday and narrated what happened to me. They said the man beat his stepsister and she went ahead to commit suicide. It was after the incident that I heard people say he had been beating her. I have not heard it before until the incident happened,” Adeigba stated.

The acting traditional ruler in the community, Pastor Moses Bakare, told our correspondent that he received several calls from locals, lamenting how Moliku used to maltreat the lady.

He said an official of the Lagos State Neighbourhood Safety Corps and a policeman from Owutu Police Station, visited the scene of the incident but did not inspect the victim’s body to verify if it bore marks of violence.

Bakare explained, “A resident informed me of the incident on Monday morning. I asked if any security agency is aware and he said one Mr Rasaq from LNSC was at the scene of the incident. I called the official and asked him about investigation carried out so far on the matter.

“I asked him if he checked her body but he said he didn’t. I told him he should have checked to verify what people were saying. Everybody was lamenting that she committed suicide out of frustration. Many residents called me on the phone to make the same complaint and they sought justice on behalf of the lady.

“I learnt that a policeman from Owutu Police Station also came to check her body. I called him and he said the lady took Sniper. He told me he didn’t check her body. Some youths wanted to burn the man’s (Moliku’s) house but I calmed them.

“I asked his wife what happened and she said the lady erred and her husband beat her small. I had a meeting with the CDA members on Tuesday. We were concerned about the circumstances leading to the lady’s death, but there is nothing we can do if the police cannot take the necessary action.”

In an interview with our correspondent, Moliku admitted beating his stepsister that day but said it was not responsible for the suicide.

He said he suspected she was pregnant and was afraid to disclose it as he had warned her against unwanted pregnancy.

Moliku stated, “I had been taking care of her since she was small. Would I pray that she die now? I didn’t beat her over bread. I sent her on an errand and called her on the phone but she didn’t pick up the calls. That was why I beat her. I gave her three strokes of the cane on the palm. It happened in the morning and we took breakfast and lunch together. I then went to have a haircut.

“I suffered a lot on Sherifat and her siblings. She was in SS3 and was preparing to sit WASSCE. Their mother left them at tender ages. I was the one taking care of them. My children have been in sadness since she died. Even when the school was on holiday and I told her to visit her mum, she would not go. If I had been maltreating her, wouldn’t she go? There was no mark of canes on her body.

“I don’t know what could have made her to commit suicide but I thought she was probably pregnant. I always begged her not to get pregnant untimely.”

Moliku denied any cover-up, noting that he was too devastated to report the incident to the police.

He added, “Officials of LNSC saw her body and they checked it. I was confused. I didn’t report to the police but the LNSC officials said they reported the case at the Owutu Police Station. I collected a doctor’s report and some residents wanted to join me to bury her at a cemetery.

“I called her mother and some other family members and they told me to bring her corpse home. I searched for an ambulance that Sunday night that took her to Ijebu. She was buried on Monday morning. I never nursed any evil against her. It was only God who could console me.”

The spokesperson for LNSC, Mr Sikiru Olusesi, said according to information he got from the corps officer in charge of Ikorodu West, some officials visited the scene of the incident and took photographs, adding that the Divisional Police Officer, Owutu Police Station, was informed.

Olusesi said, “The Chairman CDA Olorunshogo at Yewa Isawo, called the CO (corps officer) Ikorodu West of the Lagos Neighbourhood Safety Corps, Mr Oseni Rasaki, that there was a suicide case in their area. The CO called the Owutu DPO to alert him of the incident being within his jurisdiction and having authority of prosecution on such case. While the CO was on his usual patrol having been alerted of the case met a mammoth crowd at Bethel Hospital where the corpse of the lady was lying.

“He further told the CDA Chairman and some residents to make sure the case was formally reported and documented at the Owutu Police Station. He also advised them to take the corpse along with the community representatives to the station which they refused for reasons unknown to him.

“But as of Thursday, we learnt the police had begun investigations into the suicide case having heard the rumour of frequent faceoff that led to beating by her supposed (step) brother.

The Police Public Relations Officer in the state, SP Bala Elkana, confirmed that investigation had commenced on the case.