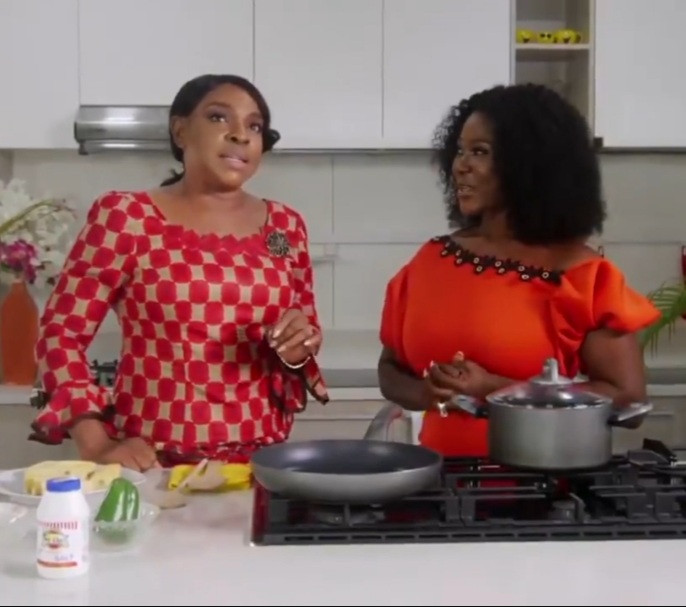 Mercy Johnson and veteran actress Liz Benson had a discussion about family during Mercy’s cooking show.

The women touched on a number of topics, including feminism, infidelity in marriage, and women sacrificing so much.

Mercy Johnson asked Liz Benson if it’s wise to move out if she catches her husband Prince Odi Okojie with a side chic and Liz Benson responded that moving out isn’t wise, rather, she should draw from her inner strength as a woman and work on the marriage.

“You hear that? Even when I get him doing the wrong thing, we’ll work on it,” Mercy Johnson concluded.

Mercy also asked Liz Benson if she’s a feminist but the older woman said she’s not.

They went on to talk about women sacrificing too much in marriages and if it’s wise to continues even when the spouse doesn’t appreciate it.

Liz Benson stated that women were made to be helpmeets and are supposed to help their spouses, children, and give of themselves for their family, even if their spouses are not appreciative of it.

She adviced that a woman should continue sacrificing and pray that her spouse comes to appreciate her eventually.

Watch the videos below.

Mercy Johnson: “If I catch my husband with a side-chick, is it fine if I move out”

‘Please pray for me’ – Singer Tekno reveals he is suffering...