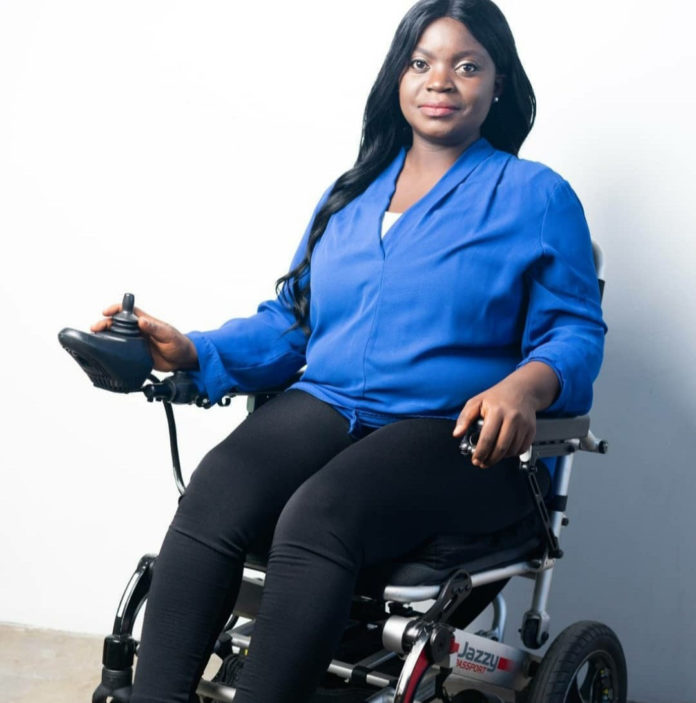 Ovi James has taken to Instagram to call her mother out while accusing her of a number of shocking things.

The disability advocate said her mother, who is a medical doctor and pastor, is a fake mother.

She accused her of maltreating her, abandoning her when she became sick with cancer, body-shaming her and forcing her to eat only one green apple a day to lose weight.

She also accused her mother of giving her bleaching cream to make her skin lighter.

She told her mother she has disowned her and she can now take her younger sibling as her second child.

She also claimed that her mother “got rid” of her cousin Blessing then “happily delivered the news of her demise”.

She further claimed that her mother indoctrinated them to believe that their grandmother is a witch and used to pray for the old woman to “fall down and die.”

She went on to make other accusations and vowed to “never” respect her mother.

She began in the three-part open letter:

OPEN LETTER TO MY FAKE MOTHER

As I under go chemotherapy to flush out all the cells in my body that make me sick. I strongly need to also do an emotional detox.

Why did you ask God for a child and abandon it? Of course it’s you. You will always find a way to justify ur mess.

I was diagnosed with Primary Progressive Multiple Sclerosis, fibromyalgia and endometriosis. I told you about my diagnosis. You said I should come to Nigeria. As a medical doctor, you are a huge disgrace to the medical feild. You igonored all my early symptoms, you blamed me every single time I got sick, you demonized me so much all you could say to me was, “Ovi, you need deliverance”. From you? Most definitely.

You got mad at me when I went to the doctor. Several times you told me I was wasting my money. IMAGINE

I am currently under going chemotherapy and a bone marrow transplant. When I told you I had Multiple Sclerosis, your response was, “So what do you expect me to do? You preach love and forgiveness but you are the most toxic person I have ever encountered.

Remember when you took my son from me and promised me that I will have him when I was ready. How did that go? You told me I was not good enough to raise a man. I am doing way better than you. At least I didn’t abandon my child. You didn’t finish taking care of your children. It is my son you want.

Then you changed your name to James without telling me. Your husband on top of that STOLE my name. Ovbioise. I have dumped it for you. But I will always be Ovi. There nothing, absolutely nothing you can do about it. If you want fast and pray na you sabi. Hug transformer hey it’s not like you wish me well. Unlike you I will not hide my disgust for you. I will sing songs of your works.

I was homeless for 4 years. You abandoned me but have some nerve to still preach the gospel. And then wonder why I don’t believe in your God. You forgot that the year before I got sick I watched you spend $30,000 on your church people then you came to my city and claimed to be broke. I had to pay for your hotel stay while you trashed talked me the entire time.

The part 2 of her letter reads:

Mother, you are a very wicked woman. You will definitely reap what you sow. You left me here to die not knowing the dragon that’s on the inside of me. If you want, call it a demon. As you can see I don’t care cos you act more like the demons you claim to bind and cast.

If this is what christianity is I don’t want to have ANYTHING to do with it. You and your God will sort yourselves.

Your church members called me all kinds of names for telling my truth. I don’t care if you send all your members for me. It still won’t break me. You have clearly indoctrinated them and you think I can’t see through it.

Don’t ever call me your daughter. Don’t . Your second child is now your first born. They wished me dead. Take my name off your publications and my picture of your WhatsApp. Stop lying to the people. You, your husband and children blocked me since 2018 right after my horrible car accident so why are you lying to your church members. Tell the truth. Crop my face out cos you have already “cropped” me from your life.

Fake mother. You are an abusive woman. Let me tell you how. You indoctrinated us to believe our grandmother was a witch, you will conduct prayers saying she should fall down and die. You also got rid of Blessing (my cousin) for the same reason (I still can’t believe your husband accepted that rubbish from you). I remember you and my sister happily delivering the news of her demise to me. That broke me. I couldn’t talk for days.

You will tell me I am too fat and how I need to look like my skinny friends. Or how about when you starved me the first time you came to the US because according to you I was fat. I had only one apple a day. A green apple. Took me years to be able to eat a green apple again. I will never forget that. Remember when you gave me bleaching cream? I still remember that purple bottle. You called it toning because of the sun smh. Common.

I will NEVER respect you. Mark my words. You have lost every ounce of respect that I ever had for you even though you lied to your people saying I was disrespectful. You haven’t seen disrespect yet. I was too good for you. Too good.

people who love me and are my family. They value me, cherish me. Plus I love myself too. Something I know you can’t say.

Remember when you treated me like house girl/slave. Even when I was sick. I almost lost my mind because of you. I almost committed suicide because of you. Until I realized what you really are. I have seen your true colors and eww very disturbing and disgusting.

El-Shaddians we are officially broken, divorced, ended, whatever you wanna call it. I have unfriended you all on Facebook and if I missed anyone please unfriend. I’m so glad for this dark part of my life to be over.

I’m so excited for what is ahead of me.

P.S. Your value does not decrease based on someone’s inability to see your worth.

Lucky Igbinedion’s Son Killed In Fatal Accident In The US.