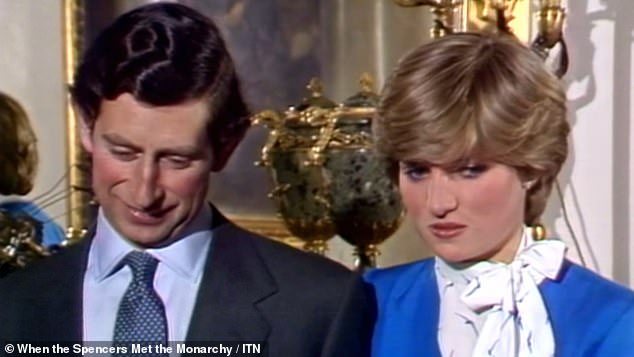 Newly unearthed footage of Prince Charles and Diana’s infamous engagement interview has emerged, showing the Princess of Wales looking ‘clearly dissatisfied’ after her husband-to-be’s comments asking if the couple were ‘in love’.

On February 24, 1981, after months of speculation, a 32-year-old Charles who had long ‘needed’ to find a bride was marrying an excited 19-year-old then known as Lady Diana Spencer.

When they were asked – at the Buckingham Palace photo call – whether they loved each other, Charles’s response to Diana’s ‘of course’ was the unforgettable: ‘Whatever in love means.’ 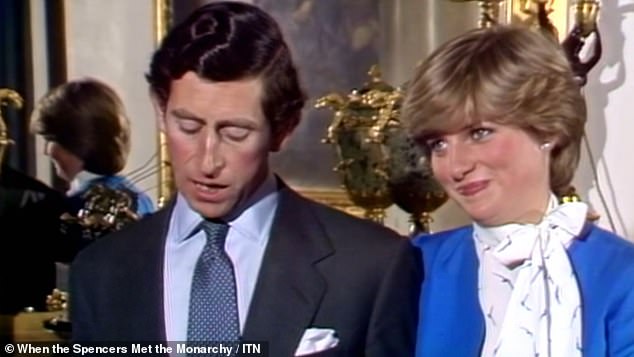 The clip usually cuts off immediately after Charles’ comment, but new footage, airing on Channel 5 on Sunday, shows the royal’s face drop and show clear dissatisfaction at Charles’ blunder.

Royal experts have said the footage is ‘shocking’  and ‘incredible’ forty years later.

‘The expression on her face is so eloquent.

‘I’ve never seen her show, so clearly, dissatisfaction with him on camera before, it’s a most remarkable piece of footage,’ royal historian Piers Brendon tells the documentary.

Royal biographer Angela Levin said that the interview was one of the early signs showing the difference and potential problems between the Spencers and Windsors.

‘Diana really couldn’t be a Spencer and show what she felt she had to be a Windsor, to keep it all under wraps,’ she said.

‘Charles was baffled as to how to answer a question that was about his emotions.

‘Don’t forget he had been brought up by the Queen and The Duke of Edinburgh to hide what they felt,’ she added.

‘You can actually see the light go out behind her eyes, she felt almost a world collapse,’ Diana’s biographer Andrew Morton added.

It comes as a clip of Princess Diana’s infamous interview with Martin Bashir in which she discusses feeling ‘unsupported’ by the royal ‘establishment’ has resurfaced and sparked comparisons to Meghan Markle’s bombshell sit-down with Oprah Winfrey.

The Duchess of Sussex told the chat show host she ‘couldn’t be left alone’ and confessed she ‘didn’t want to be alive anymore’ before claiming the Buckingham Palace HR department ignored her plea for help because she wasn’t a ‘paid employee’.