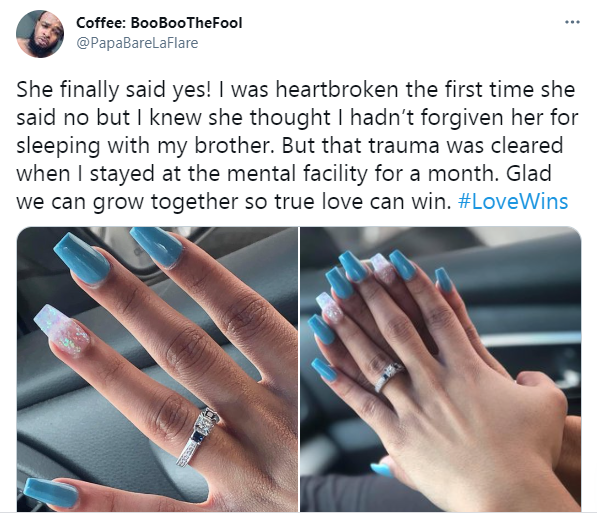 A Twitter user has expressed excitement of getting a “yes” from his girlfriend who initially turned down his proposal because she thought she hadn’t forgiven her for sleeping with her brother.

@PapaBareLaFlare said the trauma of getting to know that his girlfriend slept with his brother cleared off after he stayed in a mental facility for one month. He added that he is glad that they can grow together so true love can win.

She finally said yes! I was heartbroken the first time she said no but I knew she thought I hadn’t forgiven her for sleeping with my brother. But that trauma was cleared when I stayed at the mental facility for a month. Glad we can grow together so true love can win.

Also reacting to the negative comments he got after his tweet went viral, the Twitter user wrote;

I think all the negative comments are disgusting…one day y’all want black women to be loved and black families to stick together but I can’t forgive her for makin a couple mistakes with him? At least it’s my brother it coulda been my best friend. #LoveWins #SaveTheHate

What To Do If You Find Yourself In An Abusive Relationship