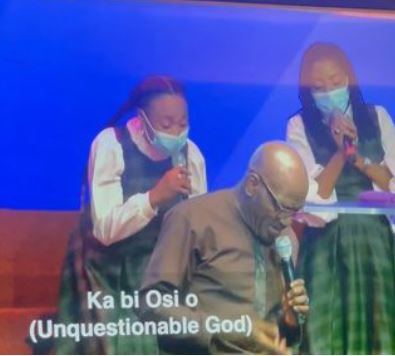 Pastor of the fountain of life church, Taiwo Odukoya who lost his wife on the 8th of November to cancer was seen on Sunday morning worshiping God on the alter.

You will recall that this is his second wife he is loosing, the first was Bimbo Odukoya who died in the Sosoliso plane crash and now Nomthi who he married from South Africa who died  after a 2 year battle with cancer. He was married to Nomthi for 11years and they had two children together.

His son, Jimmy Odukoya shared a video of his father worshiping God less than a week after loosing his wife.

May God continue to strengthen him and his family