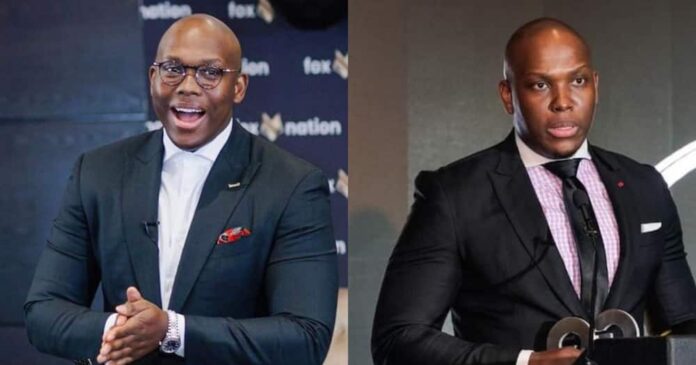 Author Vusi Thembekwayo has allegedly been charged with gender-based violence against his wife Palesa Thembekwayo.

Sunday World reported that Thembekwayo slapped his wife, dragged her by the feet during a heated argument in their home. The alleged incident happened ten days into the global 16 days of Activism Against Women and Children Abuse campaign.

A police statement states that Thembekwayo found his wife sleeping in their matrimonial home and woke her. He woke her up, instructed her to pack her bags and go.”

Vusi Thembekwayo is in big trouble, you don’t just brush off GBV allegations with a mere press statement.

His career rests on his reputation. Throwing his wife under the bus was also a bad move. It’s a perception game before the matter is resolved in court

“She refused and an argument ensued.”

“He pulled her by the legs off the bed, slapped her several times, and dragged her down the stairs”

“Loaded her bags in the car, and forced her in the car.”

The statement adds that Palesa jumped out of the car and ran away when they stopped at the traffic lights near Crowthorne, Midrand.

Vusi Thembekwayo said “he’s a Man who like to keep his family matters private”, but he ended up telling the public that “his wife a drug addict.” pic.twitter.com/5ethKijYkG

Dakore Egbuson Will ‘Donate Her Cornea’ To Eye Bank When She...