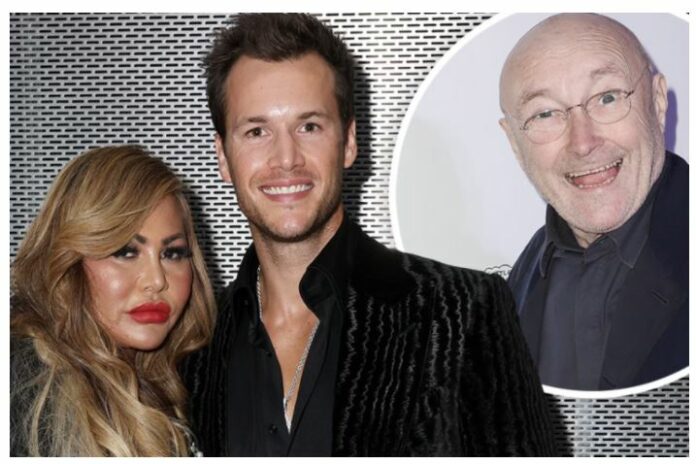 Phil Collins’ ex-wife Orianne Collins, 47, has announced that she is filing for divorce from her husband of one year, Thomas Bates, 32.

The jewellery designer took to Instagram with a note addressing the marital split, including a line reading: ‘I believe the emotional stress of the COVID quarantine caused me to act in ways to do things that were out of character’.

Orianne pointed to the pains of the pandemic as a key factor in the split, writing in her concise statement: ‘I believe the emotional stress of the COVID quarantine caused me to act in ways to do things that were out of character’.

She vowed that she would handle the situation the right way, while sending her gratitude to her loved ones.

She went on: ‘Fortunately I have faced challenging situations before and like I always have, I will muster up the strength I can, the best team I can find and the courage to do the right thing… Thank you to so many who have supported me in the past – it means so much to my family and me.’

The news comes more than a year after the pair exchanged vows on August 2, 2020, at the Graceland Wedding Chapel in Las Vegas. 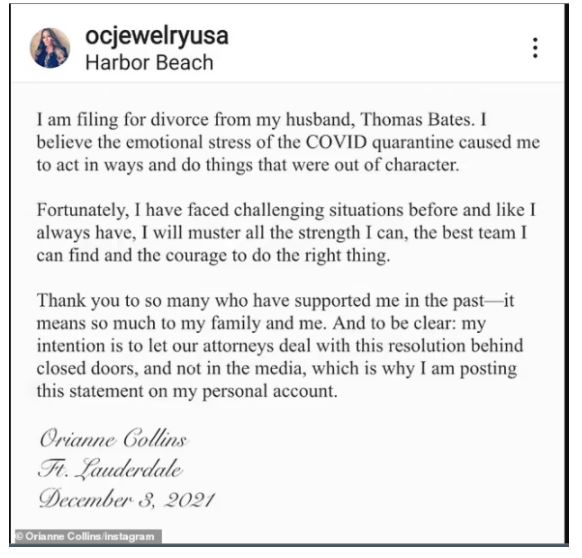 In October, a judge granted Orianne clearance to sue Collins, 70, over finances related to the property.

An insider told Page Six: ‘The original deal was that she gets half the value of the house. That was the agreement they made. She’s suing for half, and he tried to get [the case] dismissed. Now the judge ruled that her case can move forward.’

The Sussudio artist last year filed legal paperwork to evict Orianne from the premises after learning that she and Bates had exchanged vows.
Orianne and Bates moved out under the terms of a partial settlement ‘to get her out of the house and relocate, so he could sell it,’ an insider told the outlet.

The insider told the outlet that Orianne ‘was never evicted’ from the home, and ‘feels really good’ about the case moving forward.

A rep for Collins told the outlet that ‘the [new] motion argued that Orianne’s case was filed in the wrong court, and [she] had to refile in the correct court, so the only significance in this ruling is the court that she’s going to lose in.’

The news comes a week after Orianne discussed her bitter split from Phil in a candid interview – in which she claimed the rocker ‘made her out to be a b***h.’

Speaking to The Sun, Orianne said: ‘We were living together in Miami Beach with our children for more than six years. It was my house as much as his house.

‘And when he found out I got married, he got super mad and that was it… It is sad to be honest. It is very sad the way he puts the view where I am pitched as a very bad person.