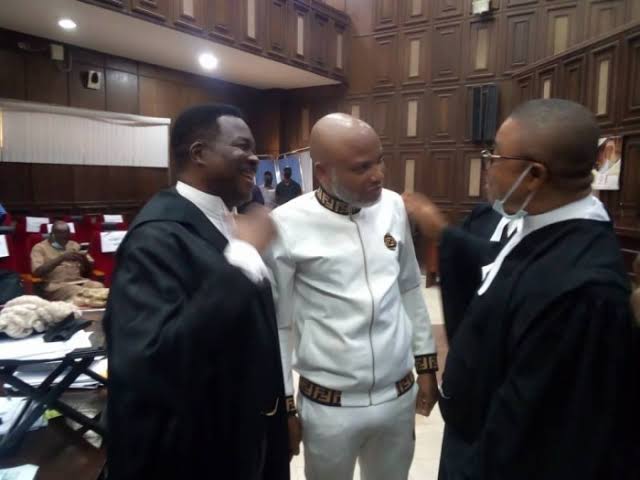 Contrary to the order of Justice Binta Nyako, the detained leader of the Indigenous People of Biafra, IPOB, Nnamdi Kanu, today, appeared before the Federal High Court in Abuja for his trial, putting on the same Fendi designers clothes he has been wearing since June last year when he was arrested.

Justice Nyako had yesterday, ordered the Department of State Services, DSS, to allow Kanu to have a change of cloth.

“I don’t want to see him in this cloth again. This one is almost off-white. Also make sure that you allow him to exercise and give him a good mattress”, Justice Nyako had ordered.

Meanwhile, when the matter was called up today, the Prosecution counsel, Mr. Shuaibu Labaran, told the court that Kanu was the one that chose to wear his designers Fendi clothes.

He said: “My lord, based on your order yesterday, we provided the Defendant with a new Orthopedic mattress, pillows and blankets.

“As for his appearance, he chose to wear this particular one because he said that it is designers”.

In his response, Kanu’s lead counsel, Chief Mike Ozekhome, SAN, told the court that it was not true, noting that his client did not insist on wearing his designers clothes.

“My lord what happened was that by the time proceedings ended yesterday, and because it was not his visiting day, we were not able to pass to him, some clothes we obtained for him.

“We even discussed it with him this morning and he said that on the next visiting day he would want to have the new clothes”, Ozekhome added.

Basket Mouth releases a statement after he was removed as an...