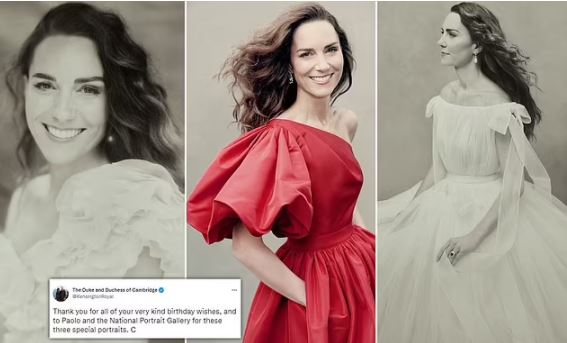 The Duchess of Cambridge has thanked supporters who have wished her a happy birthday.

Kate, who turns 40 today, took to Twitter to personally thank everyone who had sent her messages on her birthday.

It is rare for the duchess and her husband William to personally write their own tweets from the @KensingtonRoyal twitter page – with only one recent example of the duke telling the England football team they ‘can all hold your heads high, and be so proud of yourselves’.

Posting on the website, the duchess wrote: ‘Thank you for all of your very kind birthday wishes.’

She also thanked Paolo Roversi and the National Portrait Gallery following the release of three portraits of her to mark her 40th year.

The duchess added: ‘And to Paolo and the National Portrait Gallery for these three special portraits.’

Members of the Royal family, including the Prince of Wales and the Duchess of Cornwall, also publicly sent their best wishes to the duchess.