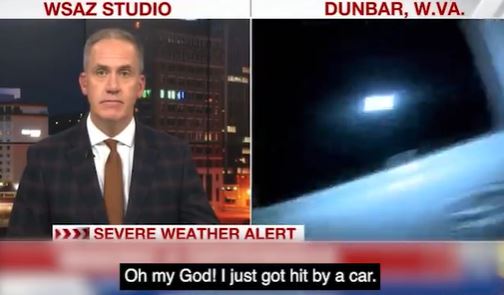 ‘Oh my god, I just got hit by a car’ – WSAZ TV reporter Tori Yorgey hit by an SUV during LIVE broadcast

A West Virginia television news reporter was hit by a car during a live broadcast on Wednesday, with the vehicle slamming into her from behind and knocking her to the ground — but the consummate professional quickly assured viewers that she was OK before standing up and finishing her report.

Video shows Tori Yorgey, a journalist at WSAZ-TV, looking into the camera as anchor Tim Irr, seen on split screen back in the studio, introduces her report on a water main break in Dunbar.

Yorgey nods and is just about to speak when she is suddenly struck from behind by an SUV, sending her flying into the camera and onto the floor.

Wow, this reporter gets hit by a car, and rebounds to finish the live shot! 😂 pic.twitter.com/dbwKt5N1xc

Yorgey continued to assure Irr and viewers that she was OK even as she gathered herself to stand back up, and she even assured the driver who hit her that there was no problem, calling her ‘sweet’ for her concern.

The woman who had apparently been driving the SUV could be heard off camera apologizing to Yorgey and asking if she was OK.

‘Ma’am, you are so sweet, and you are OK,’ Yorgey, who sounded out of breath, said.

As the live broadcast continued, Irr asked Yorgey where she had been hit by the car because she had disappeared after the impact.

‘I don’t even know Tim,’ a visibly-shaken Yorgey said, asking someone off-camera where she had been hit.

‘My life just flashed before my eyes. But this is live TV and everything is OK,’ Yorkey added while smiling. ‘I thought I was in a safe spot but clearly we might need to move the camera over a bit.’ 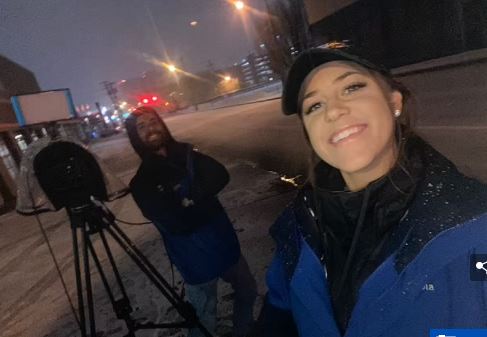 Astonishingly, despite being flung to the floor after being hit by a SUV, Yorgey continued her report

Buhari’s wife and children are entitled to presidential jet – Garba...