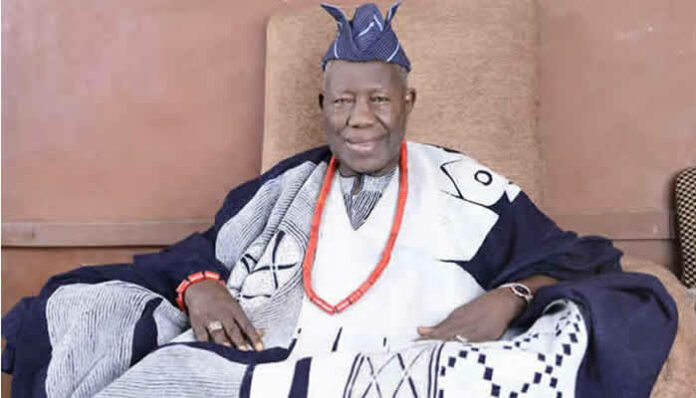 The University College Hospital, Ibadan has narrated that the Olubadan of Ibadan, Oba Saliu Adetunji, died at the Intensive Care Unit of the hospital at 01.15 am.

The hospital in a statement by its Deputy Director of Information and Public Relations Officer, Toye Akinrinola, said the monarch was referred to UCH from a private hospital in Ibadan about 9.30 pm on Saturday.

The CMD was said to write the Governor, Seyi Makinde, to inform him of Olubadan’s death.

The statement read in part,  “The Olubadan of Ibadanland, His Imperial Majesty, Oba Saliu Akanmu Adetunji, Aje Oguguniso 1, on  January 2, 2022, passed on at the Intensive Care Unit  of the University College Hospital, Ibadan at 1.15 am. 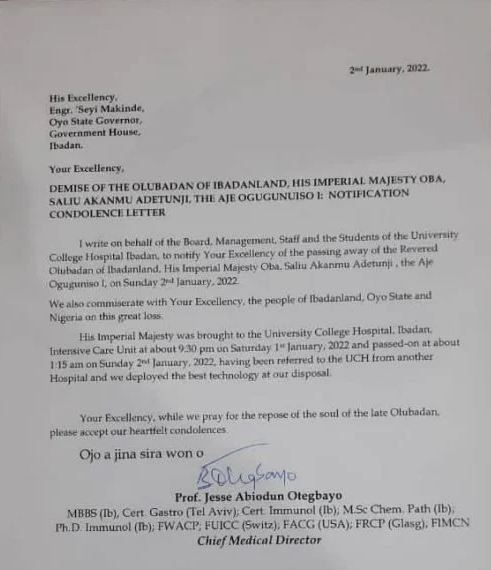 “The late Monarch was referred to the UCH from a private hospital in Ibadan at about 9.30 pm yesterday.
“He was immediately admitted at the ICU where the Chief Medical Director CMD, Professor Jesse Abiodun Otegbayo directed that a high-powered medical team be constituted to provide the best medical treatment to him.
“By 1.15 am today, His Imperial Majesty breathed his last breath.
“The CMD was at the ICU in the early hours of today to pay the late Olubadan his last respect.
“Afterward, the CMD wrote a letter of notification of the demise of the revered Monarch to His Excellency Governor Seyi Makinde of Oyo State which was received by the Permanent Secretary of the Oyo State Ministry of Local Government and Chieftaincy Matters, Dr. Bashiru Olanrewaju on behalf of the Oyo State Government. A similar letter was written to the Family of the departed Olubadan.
“The CMD further ensured that the remains of the late Monarch were taken care of in a manner befitting to the late Olubadan.
“Professor Otegbayo also escorted the corpse of Oba Adetunji from the ICU to a waiting ambulance and handed the corpse to the family and other dignitaries on the ground.”

Also, the Vice-Chancellor, University of Ibadan, Prof. Kayode Adebowale, commiserated with the immediate family, good and progressive people of Ibadanland, Oyo State, and Nigeria on the death of Adetunji.

He described Oba Adetunji as a pillar of support to the University, who indeed, never missed an opportunity to offer wise counsel and words of support for the progress of the institution.

The VC noted that Oba Adetunji was an enthusiastic investor and consummate people manager who contributed immensely to the success of many Nigerians.

Adebowale said, “My last engagement with Oba Adetunji was on 16 November, 2021, when he received our Chancellor and Sultan of Sokoto, Alhaji Muhammadu Sa’ad Abubakar, on a courtesy call, in his Popoyemoja Palace. Kabiyesi demonstrated that he was UI’s father and Chief Landlord. UI was, indeed, honoured and celebrated on that memorable visit.”

For Prof. Adebowale, “Our consolation lies in the great deeds of the late Olubadan which are engraved unforgettably in the hearts of women and men. Such deeds, which knew no ethnic or religious boundaries, bear clear testimony to the late Olubadan’s triumph over death.

“On behalf of the governing council, management, staff, and students of the University of Ibadan, we sincerely commiserate with the Governor of Oyo State, Engr. Seyi Makinde, the immediate family of the late Olubadan, Olubadan-in-Council, Central Council of Ibadan Indigenes (CCII), and all Ibadan indigenes and residents.”

See The Reply Caroline Danjuma Gave A Fan Who Said Her...