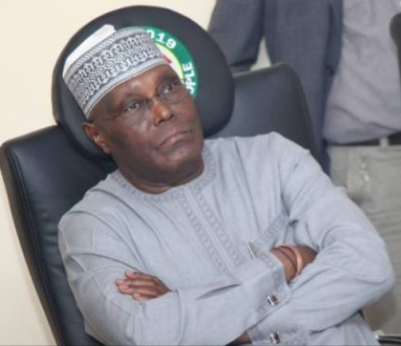 AHEAD of the 2023 elections, youths in the Southern part of Nigeria have asked former Vice President Atiku Abubakar to declare his intention of running for President.

The group, under the aegis of Southern Youth Alliance, declared it would consider  Atiku’s further silence on the 2023 presidency as an act of cowardice.

The President of SOYA, Ismail Ridwan, said this in Abeokuta, Ogun State, on Monday, during a press conference organised by the South-West arm of SOYA, in support of the former Vice President’s ambition.

Members of the group were armed with placards with inscriptions such as, ‘Age is an advantage for Atiku,’ ‘Atiku loves the youth,’ ‘PDP is safe with Atiku,’ and ‘Atiku for President 2023,’ among others.

The SOYA President noted that his group had made a case for youths in leadership positions, saying more emphasis should be placed on competent leadership.

He also submitted that Nigeria is confronted with “monumental challenges”, including insecurity, poverty and increased debt, saying the country   requires a leader “who can speak the truth, mend fences of division and belong to the South and the North.”

According to Ridwan,  Atiku possesses leadership qualities to fix the nation’s challenges and place Nigeria on the right footing.

He said “We are also not comfortable with the seeming silence of reluctance of Atiku in declaring his intention to contest the presidential election.