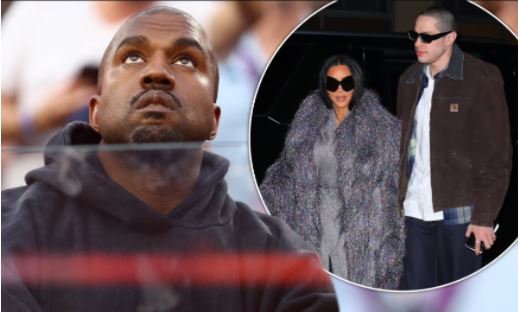 On Monday morning,  the rapper, 44, shared a new post where he declared his love for Kim and their four children after it was revealed he has split from his new girlfriend, Julia Fox after weeks of dating.

Kanye shared a Dailymail.com article showing Kim out with her boyfriend Pete Davidson, and wrote: ‘I DON’T HAVE BEEF WITH KIM I LOVE MY FAMILY SO STOP THAT NARRATIVE IM NOT GIVING UP ON MY FAMILY.’

Kanye went on to reveal that he had bought Kim the $23k Balenciaga coat she wore on the date night with Pete, adding that he gave his ex the coat before her Saturday Night Live hosting gig in October – the night she met Pete.

‘I BOUGHT THIS COAT FOR KIM BEFORE SNL I THOUGHT IT WAS PARTICULARLY SPECIAL I HAVE FAITH THAT WE‘LL BE BACK TOGETHER,’ Kanye wrote.

He continued in the Valentine’s Day post: ‘WE HAVE A PUBLIC RELATIONSHIP BECAUSE WE ARE PUBLIC FIGURES SO TO THE PUBLIC AND TO THE PRESS SOMETIMES PEOPLE CALL ME CRAZY BUT TO BE IN LOVE IS TO BE CRAZY ABOUT SOMETHING AND I AM CRAZY ABOUT MY FAMILY HAPPY VALENTINES.’

Shortly after his coat post, Kanye shared another, thanking fans for their comments about his relationship with Kim. ‘THANK YOU GUYS FOR YOUR SUPPORT OF MY FAMILY MY FAMILY MEANS MORE TO ME THAN ANY OTHER ACCOMPLISHMENT IN LIFE,’ he wrote.

He added: ‘IF ANYONE LOVES ME AND MY FAMILY IF YOU SEE SKETE IN REAL LIFE SCREAM AT YHE LOOSER AT THE TOP OF YOUR LUNGS AND SAY KIMYE FOREVER.’