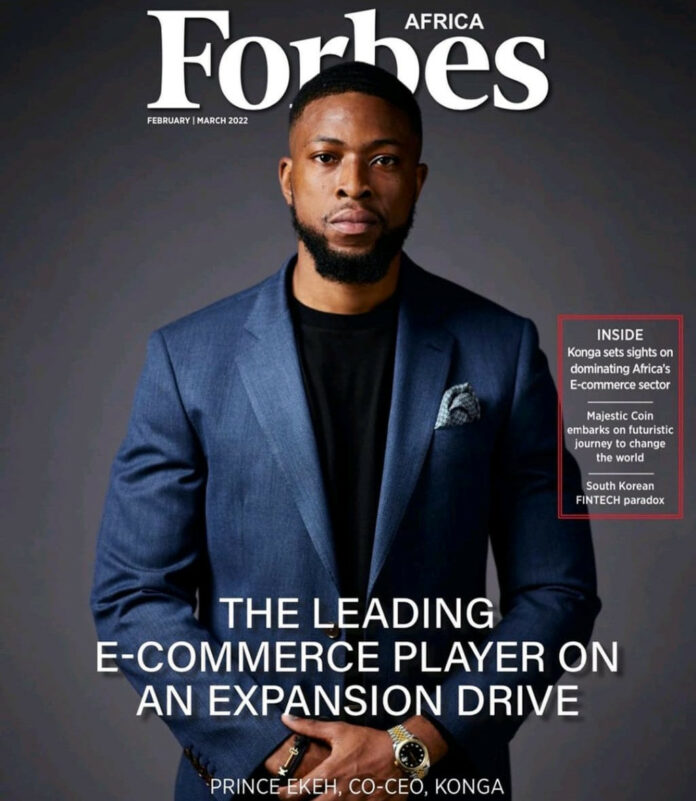 Prince Nnamdi Ekeh, the Co-CEO OF Konga, was interviewed by Forbes Africa for its March 2022 issue.

The music producer turned e-commerce entrepreneur revealed the strides made by Konga during his interview with Forbes.

In a special feature published in its Forbes Africa edition, the media company identified Konga as a strong player that is on the verge of dominating the African e-commerce scene.

Forbes said Konga “has become one of the largest online marketplaces in Africa for everything you need; from electronics, clothes, books, children’s items, computers and accessories, phones and tablets, to healthcare and personal care products, wines, toys, furniture and groceries.”

The magazine added that Konga “has experienced over 800% growth.

Following its 2018 acquisition by the Zinox Group and the tremendous growth it has recorded, Forbes Africa noted that Konga would potentially attract over a $2 billion valuation when it eventually decides to go public, as widely envisaged.

Forbes reports: “While the brand eyes its listing on the stock market to fulfil its potential in the marketplace, there are reports that it boasts over $2 billion valuation, thanks to its new acquisition by Zinox.

“Konga has continued to show promise in the online marketplace. After its acquisition, a review of the company’s performance shows the brand experienced over 800 per cent growth. This surpasses expectations in e-commerce sectors across the continent. The new phase of Konga, driven by young, ambitious and innovative individuals, has seen it rake over $300 million in investments.

Speaking to Forbes, Prince Nnamdi Ekeh praised his Co-CEO, Nick Imudia, and the entire Management and staff of the Konga Group for their dedication.

He said: “E-commerce in Africa is set to take off to unprecedented heights in the next decade and players who are well positioned will reap the fruits. Like I mentioned before, we have already seen triple-digit annual growth numbers and yet there is still so much market share left to capture as we transition people into the e-commerce era.

“I also believe blockchain and decentralized finance will play a great role in improving financial inclusion in the continent which will give people more access to digital services like e-commerce. As economists, we were trained to look at indicators and so far, most critical indicators trend positively: Population, youth population, mobile penetration growth rates, connectivity growth rates. If these indicators continue to improve, I have no doubt that Africa will house one of the biggest e-commerce players in the world, and my job is to make that Konga.”

I have been fighting bandits in my dreams since my father...