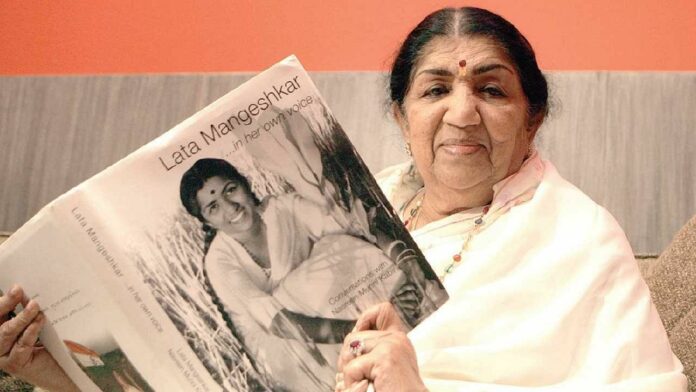 Born on September 29, 1929, Lata Mangeshkar’s death has left everyone in a state of shock as the legendary singer passed away today. She was 92 years old.

She was one of the best and respected playback singers. She recorded songs in over a thousand Hindi films and sang in more than thirty-six Indian languages.

Lata was born on September 28, 1929, to classical singer and theatre artist Pandit Deenanath Mangeshkar and Shevanti in Indore, Madhya Pradesh. Her siblings  – Meena, Asha, Usha, and Hridaynath – are all accomplished singers and musicians. Deenanath ran a theatre company that produced musical plays where Lata started acting by the age of five.

Attended school for one day:

She began singing and acting in her father Deenanath Mangeshkar’s musical plays when she was only five. On her first day at school, she started giving music lessons to other children and when the teacher asked her to stop, she felt so offended that she decided not to go to school ever. Other sources cite that she left school as she would always go to school with her younger sister Asha, and the school would object to it.

When Lata Mangeshkar was only 13 years old, her father died of heart disease and she became the sole breadwinner of the family. She struggled to establish herself as a singer in the 40s and recorded her first song in a Marathi movie Kiti Hasaal (1942). The song was later omitted from the movie. She moved to Mumbai in 1945 but her first major hit came with the song ‘Aayega aanewala’ from the movie Mahal (1949), after which she became one of the most sought-after voices of Hindi cinema. In the year 1945, Master Vinayak, who was a family friend of Mangeshkars and was taking care of them after the father’s death, offered her a minor role in his first Hindi film, Badi Maa.

In 1942, when Lata was 13 years old, her father died due to heart disease. Vinayak Damodar Karnataki, who was the owner of Navyug Chitrapat movie company and a very close friend of Lata, helped her in her career. Lata sang the song ‘Naachu Yaa Gade, Khelu Saari Mani Haus Bhaari’, composed by Sadashivrao Nevrekar for Vasant Joglekar’s Marathi movie Kiti Hasaal (1942). However, it was dropped in the final cut. After this, Vinayak gave her a small role in Navyug Chitrapat’s Marathi movie ‘Pahili Mangalaa-gaur (1942)’. She sang ‘Natali Chaitraachi Navalaai’, composed by Dada Chandekar.

In 1948, after Vinayak’s death, music director Gulam Haider mentored Lata. He made her meet producer Sashadhar Mukherjee. However, Mukerjee dismissed Lata’s voice as it was “too thin”. To which, Haider replied, in coming years producers and directors would “fall at Lata’s feet” and “beg her” to sing in their movies. Later, Haider gave Lata her first major break with the song ‘Dil Mera Toda, Mujhe Kahin Ka Na Chhora’ for the film movie ‘Majboor’ in the year 1948. It became a super hit. In September 2013, on her 84th birthday, Lata herself declared, “Ghulam Haider is truly my Godfather. He was the first music director who showed complete faith in my talent.” ‘Aayega Aanewaala’ was one of her first major hits from the film ‘Mahal’, in 1949.

In a career spanning over seven decades, Mangeshkar lent her voice to countless films, recorded over a thousand songs in over 36 Indian languages. The voice behind soulful numbers like ‘Lag Jaa Gale’ and ‘Aajkal Paaon Zameen Par’, Mangeshkar is one of the most revered singers the country has produced.  She has had an unprecedented impact on Indian film music. Since 1942, Lata has pushed back the boundaries of music with her mind-boggling skills. Over the years, Lata has sung for actresses from Madhubala to Priyanka Chopra. Best known for her versatile voice quality, she has recorded albums of all kinds (ghazals, pop, etc).

Lata has worked with several legendary music directors including Madan Mohan, R D Burman, the duo Laxmikant-Pyarelal and A R Rahman. She teamed up with Madan Mohan for the 1960s like Aap Ki Nazron Ne Samjha from Anpadh, Lag Jaa Gale and Naina Barse Rim Jhim from Woh Kaun Thi?. Lata has sung over 700 songs for Laxmikant-Pyarelal, which include Mere Naseeb Mein from Naseeb and Sheesha Ho Ya Dil Ho from Asha.  Songs like Gata Rahe Mera Dil, and Piya Tose in Guide (1965) were recorded for S D Burman.

Lata sang R D Burman’s first and last songs – in Chote Nawaab (1961) and Kuch Na Kaho in 1942: A Love Story in 1994. Her collaborations with A R Rahman resulted in popular songs like Luka Chupi in Rang de Basanti (2006) and O Paalanhaare in the movie, Lagaan (2001).  From Pyar Kiya To Darna Kya from Mughal-e-Azam (1960) to Ajeeb Dastaan Hai Yeh, from Dil Apna Aur Preet Parai (1960) to Rangeela Re from Prem Pujari (1970) or even Jiya Jale in Dil Se, the singer has lent her voice to a number of timeless classics over the years. Her last full album was for the late filmmaker Yash Chopra-directed 2004 film “Veer Zaara”.

Lata recorded her last song in the year 2019, she had landed her voice to a song based on PM Narendra Modi’s slogan ‘Saugandh Mujhe is Mitti Ki.’  In the music video, Lata was heard saying, “I was listening to PM Modi’s speech a few days ago. He said some lines in it which I felt was representing the feelings of every Indian. They touched me too. I recorded them. And today I offer it as my tribute to Indian soldiers and every Indian. Jai Hind..”.

In early 1962, Lata Mangeshkar fell seriously ill. Doctors were called, and the medical investigation revealed that she was given slow poison. She fought a life-and-death battle for three days. The episode left her physically weak, and she remained bedridden for nearly three months. Soon after the incident, their cook vanished from home, without taking his wages. During this time, the late Bollywood lyricist Majrooh Sultanpuri would regularly visit didi, taste her food first and only then allow her to eat.

She was also nominated as a member of the Rajya Sabha in 1999. Her term ended in 2006, though she was criticized for not attending the sessions. She had then cited her ill-health for her absence from the Parliament. Lata didi did not take a single penny or a salary or a house in Delhi for her services as an MP.

Lata Mangeshkar designed for an Indian diamond export company called Adora. The collection was called Swaranjali and five pieces from this collection were auctioned at Christies and raked in £105,000. Being generous as she was, she donated the money for the 2005 Kashmir earthquake relief.

It is said that Lata Mangeshkar used to eat a lot of green chillies to maintain her sweet voice. She also used to chew gum that helped in her singing. As far as her diet was concerned, the veteran loved seafood and used to eat dal-rice or phulka along with sabzi regularly. She also loved Gajar ka Halwa and Pani Puri. She loved all kinds of cuisines and also enjoyed cooking Kolhapuri mutton and sabzi.

She was allegedly romantic linked to noted musician Bhupen Hazarika. In a shocking statement to Zee News, the late musician’s estranged wife had stated that the two would spend nights together and her husband apparently told her that if a musicians wants to come up, he has to have his songs sung by Lata Mangeshkar. This statement is said to have enraged Hazarika’s partner Kalpana Lajmi and all the Mangeshkar’s. As per reports in the media, it was Lata didi’s alleged decade-long love affair with the late Raj Singh Dungapur that came to light. He was the son of royalty and he had apparently promised his parents that he would not bring home a commoner bride. It is said that the duo met in Mumbai when Raj Singh Dungapur ended up playing cricket with Lata didi’s brother at their Walkeshwar house. They came from different backgrounds and maybe those things were not allowed in those days, as commitment to families came first. Though the two remained unmarried, this itself was proof of their eternal love, if stories of their true love are anything to go by.

In 1948, a young and budding singer Lata faced rejection from producer Sashadhar Mukherjee as he dismissed her voice saying it was “too thin”.

Lata Mangeshkar’s songs have been a favourite of not just those who grew up in the 1980s and 1990s, but also the youngsters. 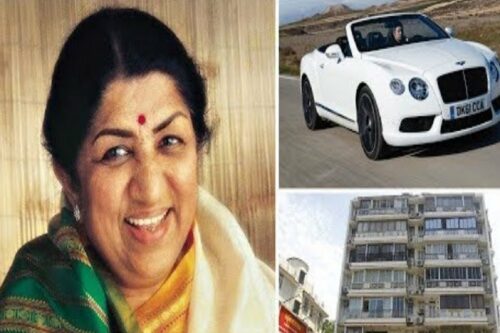 Lata Mangeshkar has an estimated value of nearly $15 million, which is solely from singing.