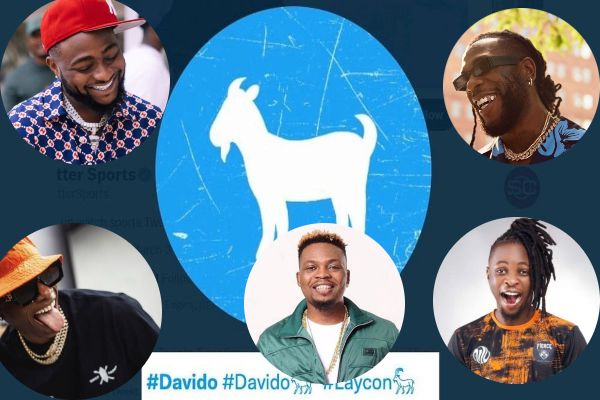 Twitter, the microblogging platform, has honoured Davido, Wizkid, Burna Boy, and Olamide, with the GOAT emoji.

The acronym G.O.A.T. praises not just exceptional athletes but also successful musicians and other public figures.

It represents the phrase “Greatest Of All Time”. It is often pictorially represented with the emoji or image of a literal goat, with horns sticking out prominently.

On Tuesday, Twitter hashtags on the names of some top Nigerian artistes started displaying the GOAT emoji.

Among them are Wizkid, Davido, Burna Boy, Olamide, and the reality TV stars including Laycon, Erica, and Maria.

Wizkid, Davido, Burna Boy and Olamide are all GOAT (Greatest Of All Time).

The symbol appears when these celebrities trend or when their names are searched with a hashtag symbol.

Genevieve Nnaji is all shades of beauty in new photo as...