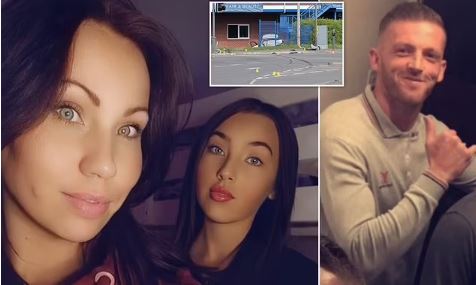 A grieving mother has blamed her ex for killing their 13-year-old daughter in a horror crash as she claimed he had been drinking all day before ploughing his BMW into a gym.

Driver Daniel Roberts and his daughter, Lacie Roberts, were killed when the car smashed into LyonsDen Fitness in Bagillt, Flintshire at around 2.30am on April 22.

Today, Lacie’s mother, Kieley Messham, claimed Mr Roberts had drunk a large amount of alcohol before getting into the car and was drunk while behind the wheel.

‘My daughter’s life has been snatched away, all for a joy ride,’ she said.

Police are investigating the collision and are asking the public to send in any dashcam footage.

Aunt Louise Messham has set up a fundraising page to help Kieley, of Flint, North Wales, ‘give Lacie the best send off we can’.

She wrote: ‘The crash killed 2 people, they were father and daughter and it also seriously injured 3 others. Our beautiful Lacie Jade Roberts has been cruelly taken from us far too soon.

‘You don’t expect for this to happen to your family but this time it has, we are really struggling to come to terms with it.’

‘We have set up this funding page to help Lacie’s mum cover the cost of a funeral for her beautiful, bubbly baby, with the prettiest green eyes you would ever see.’

She wrote: ‘Our family as you could imagine are broken and shocked at the foolish actions of Daniel that morning, the person who was meant to protect her from any harm, not endanger her life and take her away from us.

‘What he has done to us as a family is beyond any pain or hurt we could ever have imagined.’