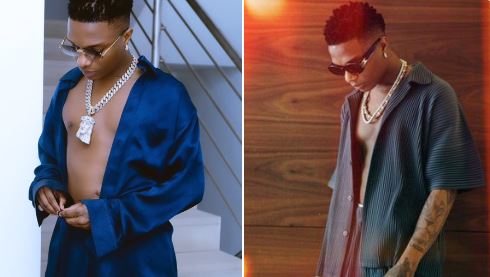 Fans of the renowned music superstar have taken to their various Twitter accounts to celebrate him and discuss his contribution to the entertainment sector.

Wizkid whose real name is Ayodeji Balogun, one of the most influential figures in the modern music era came into mainstream prominence in the early 2010s with his smash hit, ‘Holla at your boy‘. He became a sensation at the tender age of 19-20 courtesy of his youthful looks and enthralling personality combined with his musical talent.

Signed to Banky W‘s Empire Mates Entertainment (EME), Wizkid‘s debut studio album, Superstar produced numerous smash hits such as ‘Pakurumo‘, ‘Tease Me‘ and ‘Oluwa Loni‘ catapulting him into superstardom and endearing him towards a budding generation of Nigerians who were seeking relatability; a figure they admire and could stand in awe for.

The excellence of Wizkid‘s debut studio album quickly hypnotized the first sect of loyal fans who are today renowned as Wizkid FC.

Wizkid‘s first major award was the ‘Next Rated Award‘ at the 2011 Headies Award ceremony. He has since gone on to be honored across the globe; equally, he is one of the most decorated musical talents to emerge from Nigeria and Africa.

The singer has since released three more studio albums, Ayo (2014), Sounds From the Otherside (2017) and the innovation music project, Made In Lagos (2020).

Here is what Nigerians have to say about Wizkid

Happy big 32 my Idolo big wiz you came into the game no one replace u👍❤️🦅🦅 pic.twitter.com/tcRFfO6mm1

Big 32 for the GOAT😍🐐 pic.twitter.com/ETQy8WpKcH

Happy birthday to one of the greatest to ever do it. Keep inspiring the young generation❤. Small but mighty! Big Wiz💯🙌🏼💖. Big 32🎂 pic.twitter.com/GUMROc6Lci