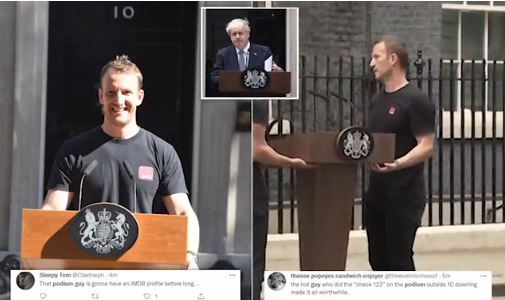 The good-looking sound engineer who sent Twitter wild when he helped set up at 10 Downing Street before Theresa May’s resignation speech has returned for Boris Johnson‘s this afternoon – to the delight of social media.

Tobias Gough, 39, from Longfield, Kent, was dubbed ‘podium guy’ after Twitter users swooned over his tight black t-shirt and muscly arms before Theresa May’s resignation speech in 2019 and gained an army of adoring fans.

And today Mr Gough was back as the sound engineer and his two colleagues carried the black podium to stand it in front of Number 10’s front door, before Boris Johnson announced he would step down as Prime Minister of the UK.

On Twitter this afternoon, many people swooned over the brown-haired man, with one writing: ‘Waiting for #podiumguy to make his cameo appearance for the final ep of the season…’

One even joked about a career in film and television for Mr Gough, suggesting his talent (or looks) is wasted on just five minutes of fame: ‘That podium guy is gonna have an IMDB profile before long…’

Wife Tina contacted MailOnline in May 2019 to shut down the hopes of his many admirers on social media, to say: ‘He’s my husband!’. And today, Mr Gough has confirmed to MailOnline that the couple are still happily married.

He also made an appearance for Theresa May’s final speech at PM in July 2019, wowing social media users when he donned a pair of shorts. 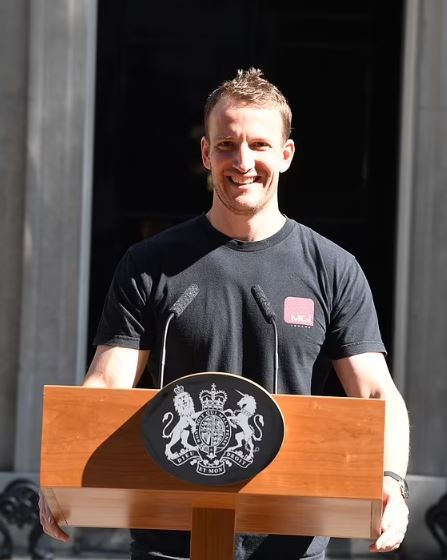 Before Boris Johnson addressed the nation to announce his resignation as Prime Minister, ‘Podium Guy’ fans called on him to step into the breach: ‘I vote that we keep “Podium Guy” on as interim and let Boris leave today,’ said one on Twitter this afternoon.

Someone else added: ‘Good to see fit podium guy is still there. Hello indeed,’ followed by a few nervous laughter emojis.

‘The hot guy who did the “check 123” on the podium outside 10 Downing made it all worthwhile,’ another said on Twitter. 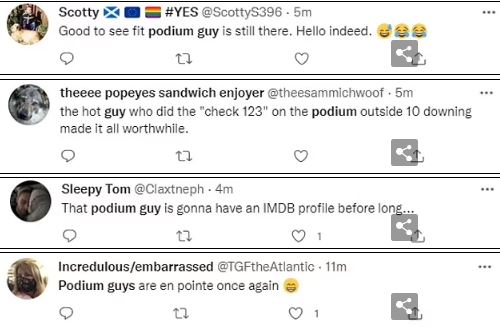 Another said: ‘Podium guys are en pointe once again.’