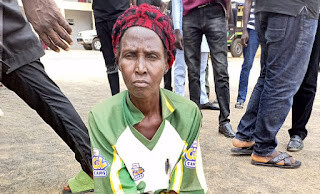 A 58-year-old housewife in Adamawa State, Hajaratu Sini, has been arrested by men of the Adamawa state police command for allegedly killing her husband’s mistress with a stick after she caught them pants down.

Hajaratu, mother of 2 who got married to her husband over 40 years ago, was among the 38 suspects paraded by the Adamawa state police command in Yola, on Tuesday.

Hajaratu’s husband and the deceased who is a widow have been secretly seeing each other. However, on July 31, Hajaratu caught them in an uncompromising position at about 9pm when she stormed the widow’s house.

Sini, who ran out of the room for safety was pursued by his angry wife and they continued their fight outside. However, in the heat of the rage, the deceased followed them outside and engaged the suspect in a fight in an attempt to defend her newfound man.

Hajaratu, who became wild, used a stick in her possession and hit the deceased on her head as a result of which she fell down and was later confirmed dead after she was rushed to hospital for treatment.

While parading the suspect, the Commissioner of Police, S.K. Akande, said that she will be charged to court soon.