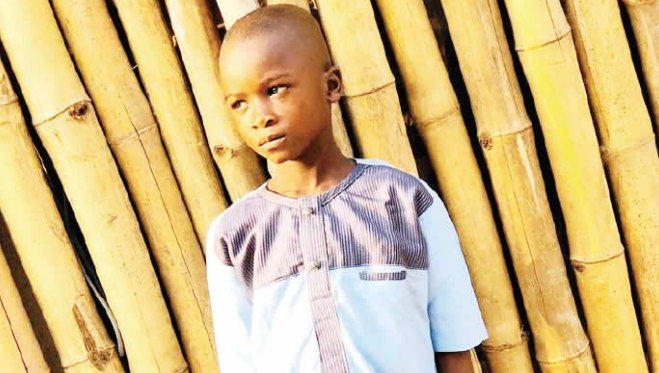 The parents of a seven-year-old boy, Adam Afolabi, have been thrown into a panic after he disappeared while running an errand in the Mushin area of Lagos State.

It was gathered that Adam and his siblings were at their parents’ residence in Mushin when his sister, Zainab, told him to help her buy biscuits at a shop located close to where they live.

Things, however, took another turn when the minor, who left his sister to buy the biscuit, did not return home.

Bothered by the development, Zainab, while trying to ascertain why her younger brother had yet to return, traced him to the shop and discovered that he was nowhere to be found.

She, however, raised the alarm over her missing brother and a search party was set up to locate Adam’s whereabouts.

Zainab, who spoke to newsmen on Sunday, said shortly after her brother went missing, people in the neighbourhood claimed they saw him running to a destination but never knew that his whereabouts were unknown as of then.

She said, “I was inside the house when I sent him to buy biscuits and go for his extra lessons. Someone said while on his way to buy the biscuits, he went down the street because a mallam sells biscuits down the street but I don’t know if that was where he went.

Adam’s father, Kazeem, while lamenting over the incident, said he had yet to locate the whereabouts of his son since he went missing on Tuesday, August 23, 2022.

Kazeem said, “I was not around when it happened; I was at work and when I returned, I was told that he was sent to buy biscuits.

“I have searched everywhere for him. I have searched the place he usually goes for lessons and the store where he was sent to buy the biscuits but we discovered that he didn’t even get to the store.

“We reported the case at the Alakare and Olosan police stations in Mushin. I was still at one of the stations yesterday and was told that they had not seen anything.

“Even when I heard that they saw some children, I rushed down to the station but the police said the children were girls and no boy among them.

“They said any time they see a boy, they will call me; they have my phone number. I’m not okay. I’m still running up and down because of the situation.”

The distraught mother, Kafayat, urged the Lagos State Police Command to help her locate the whereabouts of her son.

“I’m very sad. I don’t know how to explain myself but I’m sad. I’ve not seen my son for five days. We also alerted neighbours and they are assisting us to check around for him,” she said.

Contacted, the state Police Public Relations Officer, SP Benjamin Hundeyin, said, “I don’t have any information on that because the case is yet to be brought to my notice.”

Nigerian OAP Calls Out Man Blackmailing Her Over A Lesbian Intimacy...