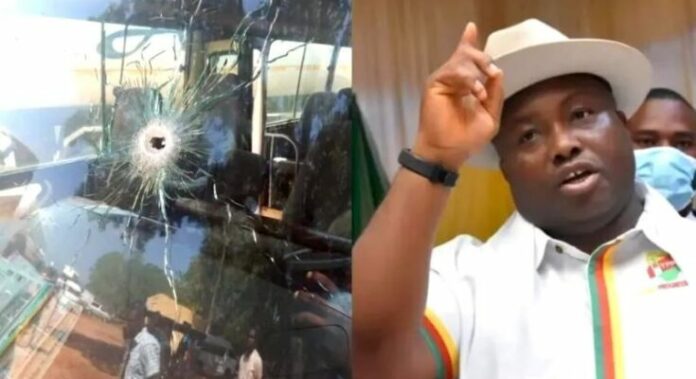 About 10 persons were said to have died in the convoy of the senator representing Anambra South, Senator Ifeanyi Ubah on Sunday evening attack.

Details gathered by Tsbnews show that some of the deceased persons have been identified.

Though Anambra State Police command had in a phone call with its spokesperson, DSP Toochukwu Ikenga denied knowledge of the exact number of persons killed, sources said about 10 persons died in the attack, which was suspected to be an assassination attempt.

Another man killed, who was not in the convoy of the Senator was identified as Onowu Agu-Ukwu Nri. He is said to be a titled chief in neighbouring Nri community, and had just driven to Enugwu-Ukwu to drop someone who visited him, who would be traveling to Lagos this morning, and he was unlucky to be at that point at the time when Senator Ubah was going to be attacked.

“He was driving a big jeep, so the assassins may have thought he was in the same convoy with the senator, and he was gunned down.”

Other people identified to have been killed were six Mobile policemen who were riding in the convoy of the Senator, and a driver, who was said to be driving one of Ubah’s cars.

The attack has been described as an assassination attempt on the senator, as eyewitnesses said the gunmen targeted every car in his convoy, especially his security men, and riddled them with bullets.

“In the confusion yesterday, all the cars were just jamming each other. Since the vehicle the senator was driving in was a bullet proof car, his driver managed to manoeuver out of the damaged cars and drove away, even as it was being shot,” the source narrated.

99% of terrorists are Nigerians – Tukur Buratai