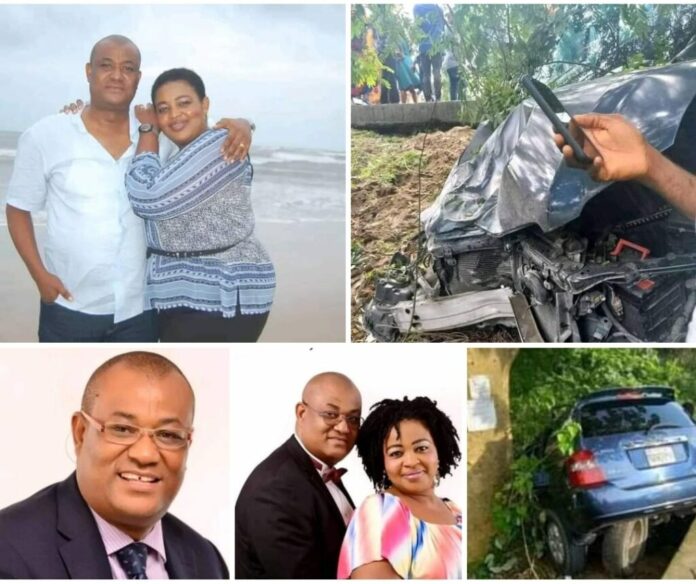 Calabar Lawyer, Sonnie Bassey, in Coma After Wife, Claret Opara Bassey, Died In Car Crash While Chasing Him With His Side chic

One Barrister Sunny Bassey, a Calabar based lawyer whose wife reportedly died in a car accident on Tuesday while chasing his car , is said to be in critical health condition since the incident.

A viral video message had said the deceased, Clara Bassey, reportedly spotted her husband driving off from a spot in Calabar with his girlfriend and immediately drove after them.

She crashed her car along the Murtala Muhammed Highway, Calabar, when the car veered off the road into a ditch.

It was reported that the husband, who was aware that his wife had spotted him and was chasing his car, drove off without knowing what had happened until he later got the news.

But a family friend of the couple in Calabar who spoke to newsmen on condition of anonymity said Bassey is currently “in a state of coma resulting from the shock that followed his wife’s death.”

Bassey is said to have regretted his actions and the feeling of guilt appeared to have overwhelmed him.

The source said, “We learnt that because of the shock the man went into a coma, and some of friends got him out of the house with the kids because he cannot be alone, being that not quite long he suffered from a stroke.”

He said Bassey’s health condition had deteriorated since the incident but his family members are trying to help him survive so he can take care of his little children.

THE TSBNEWS gathered that the deceased was also a lawyer and an Igbo woman.

It is also gathered that her family are well to do and living abroad, and have been of great help to her and her husband.

Explaining the drama that led to her death, the source said, “Though I am not acquainted with the wife and the side chick, I know the husband”

“He is a complete gentleman at first sight and looks responsible. But to my amazement, he’s caught up in this shit.

“To cut the story short, the man was in his usual Joint, which is beside SPAR, a friend’s Joint of course, where he used to go even with his side chick. The wife too used to drop by at the joint to join her husband. The owner of the Joint is an Igbo guy who is also a lawyer and from the same tribe with Bassey’s wife, but Bassey’s friend. Bassey himself is from Calabar.

“At the Joint, any time the man is with the side chick, on spotting the wife coming and trying to park in the parking lot, the side chick always excuses the man and moves over to the next table, and some of his friends will join him with no trace of suspicion.

“Although the wife was aware of his cheating habit and had been complaining badly.

“But this fateful day, when leaving the joint together, they were already seated in Bassey’s car, still in the parking lot, the wife just zoomed in. On spotting her, the husband maneuverered his ways towards the SPAR and went in through one of the gates and immediately zoomed off and headed towards the highway.

“The infuriated wife sped up and engaged the husband in a hot chase. Then on reaching Atekong Drive, the husband swiftly branched in and zoomed off, the wife on reaching the same spot in such a speed, lost control and went off down a small ditch and hit a tree and a small concrete.”

Clara reportedly died on the spot and her husband only heard about it later and hurriedly dropped off the side chick before going back to the accident scene.

“On sighting his wife’s lifeless body, he started crying, begging her to forgive him and to please come back to take care of their three boys.

“The wife was later moved to the mortuary, and as of Wednesday, some family friends went to pay him a condolence visit, but on reaching there, the place was under lock and key.”