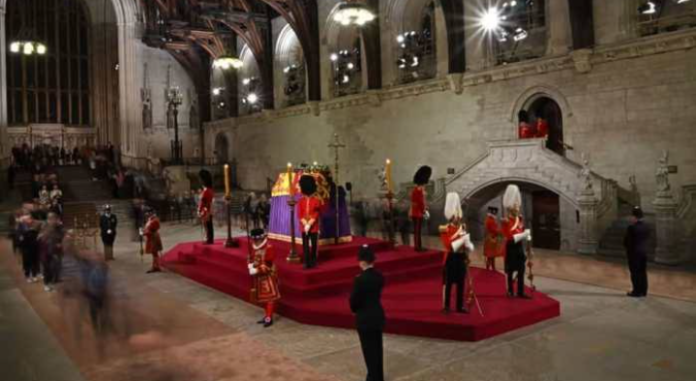 One of the British royal guards watching over Queen Elizabeth’s coffin on the first night of her lying in state at Westminster Hall collapsed in the early hours of Thursday.

Reports say he was standing at the foot of the late British longest-serving monarch’s casket when he fell to the floor, appearing to have fainted.

Footage taken from a live broadcast which was posted to social media at around 1:00 am captured the collapse.

While he was being tended to, the live vision, however, quickly faded to the exterior night-time vision of the building.

Metro reports that over an hour later, the broadcast had still not returned to the scene inside the hall.

The guard, dressed in black, was holding a ceremonial staff when he fell to the floor, but the officials who were nearby swiftly rushed to help him.

The Queen will lie in state in Westminster Hall for four full days before her funeral on Monday, September 19.

See The 10 Most Tweeted About World Leaders During #UNGA