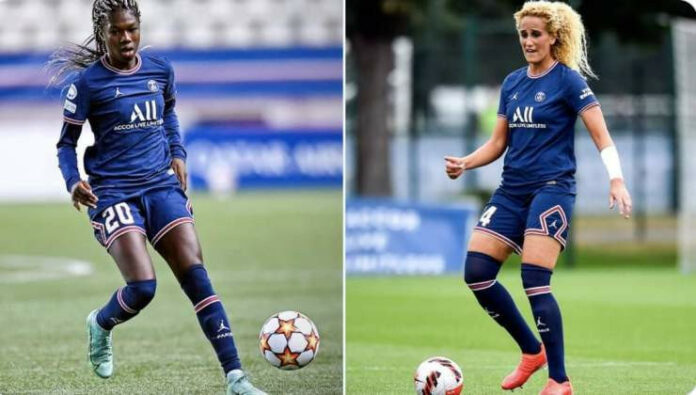 Former PSG women player, Aminata Diallo re-arrested by French police in connection with an alleged attack on one of her team-mates

Diallo has been arrested again and taken into police custody in connection with an attack on one of her teammates.

The French media reported Diallo was arrested as part of an investigation into the attack last year on Kheira Hamraoui. She was taken into custody in November after it was claimed she hired thugs to beat up her teammate so she won’t have competition on the team.

The Journal Du Dimanche have now reported that Diallo was arrested on Friday morning and is suspected of having set up the attack on her teammate.

Diallo’s questioning by police came after four men were arrested earlier this week in connection with the attack.

PSG and France midfielder Kheira Hamraoui was attacked in the street by two masked men on Thursday, November 4, 2021. She was hit several times with a metal bar and needed stitches on her hands and legs.

Diallo has been without a club since her contract with PSG expired at the end of last season.

Hours before the attack took place, all PSG players and staff had attended a ‘bonding’ inner at posh restaurant Le Chalet des Iles, located on an island in the Bois de Boulogne, Paris.

After the meal, Diallo had offered to drive Hamraoui and another player – Sakina Karchaoui – home to the nearby department of Yvelines, where all three live. Diallo had just dropped Karchaoui off at her home around 10.30pm when the masked attackers approached the car and dragged Hamraoui out.

Earlier this year, Hamraoui revealed she feared for her life when two masked men beat her legs with iron bars.

‘I experienced an attack of unbelievable violence,’ she told French newspaper L’Equipe.

‘Two hooded strangers took me out of the car I was traveling in to hit me on the legs with iron bars. That night, I really thought I was going to stay there… I was screaming in pain. I tried to protect myself as much as possible. I have a very painful memory.’