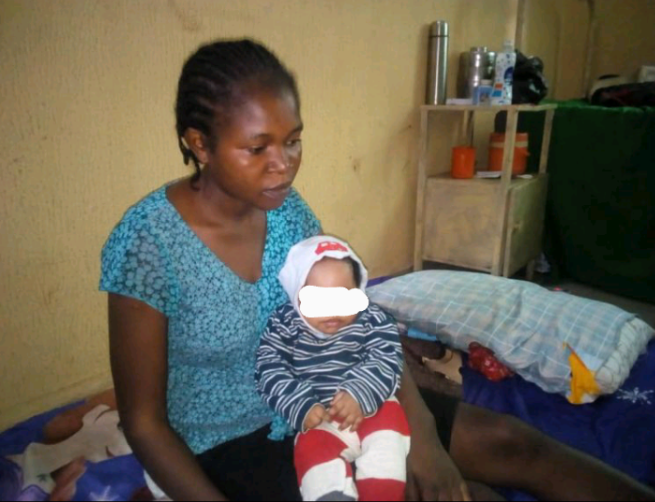 A middle-aged nursing mother, identified as Mrs Chinenye Agu, is seeking help as the hospital where she put to bed has refused to release both her and the new born baby since May.

She lamented that their situation worsened because her husband, whose name she mentioned as Anthony Agu, had lost his means of livelihood as a commercial driver when his vehicle was stolen during the pregnancy.

According to her, the husband, who now does bus conductor, had been depositing his daily returns together with contributions from some good spirited individuals at the hospital, where they were able to pay N340,000 out of the initial N480,000 charged by the hospital.

Mrs Agu, who spoke to journalists at the hospital on Tuesday, is, soliciting financial assistance from good spirited individuals and philanthropists to enable her take her baby home.

She said her family has pleaded with the hospital management to let her and her baby go, so they could be making payment by instalments, until they offset the balance, but the hospital refused.

She said, “We have been at the hospital since May as a result of our inability to pay the medical bill of N480,000. I delivered through a caesarian section and the amount they billed us was beyond us. This is our first child.

“My husband is a commercial driver, he lost his vehicle when I was pregnant and since then he has been doing bus conductor and also been making returns on a daily basis where, together with contributions we gathered, we have been able to pay N340,000 out of the original amount.

“Now, I want to go home to take proper care of my baby and that is why I am soliciting for help from kind spirited individuals. I and my baby have been managing to feed all this while, but I thank God that the baby is okay.”

Efforts to speak with a top management of the hospital proved abortive as calls put across to their telephone line were not taken as of the time of filing this report.

Meanwhile, some public commentators have condemned the decision of the hospital management to detain the woman and her baby.

Stop Discriminating Against Albinos In Your Midst – Lagos State Govt.